Light weight, highly rigid, and non-resonant structure
LIVE18 is precisely machine tooled one by one out of an aluminum block with precise and even molecular arrangement remained unchanged. Only the parts where it is necessary is thickened, resulting in high rigidity and light weight. Further, it is structured not to have sequentially the same shape to kill standing wave generation.

18 circuits to cancel longitudinal wave vibration
Vibration emitted from a phono cartridge vibrates a head shell with crude or longitudinal wave. The vibration causes resonance in the head shell and reflects to the cartridge, resulting in having considerable harmful effects to the sound quality reproduced by the cartridge. On the other hand, oscillating wave transmitted to a tone arm is reflected by the arm end back to the shell, giving overlaid vibration to the cartridge.
In order to solve this very important question, designers used to take measures by changing material and shell thickness. However, the result was that there was a change in transmission speed of oscillating wave, and it was found to be impossible to cancel longitudinal wave.

LIVE18 has been designed first time in the world by efficiently arranged 18 mechanical short circuits to evaporate the longitudinal wave vibrations. Figure 1~3 show the circuits for longitudinal waves, comparatively few. to horizontal spectrum direction, whereas Figure 1-4~18 show the mechanical short circuits for the longitudinal waves in vertical direction the same travel direction as from the cartridge. These circuits amazingly work effectively to sound reproduction of a phono cartridge. It is just what LIVE18 is with clear and natural and dynamic sound over wide range. 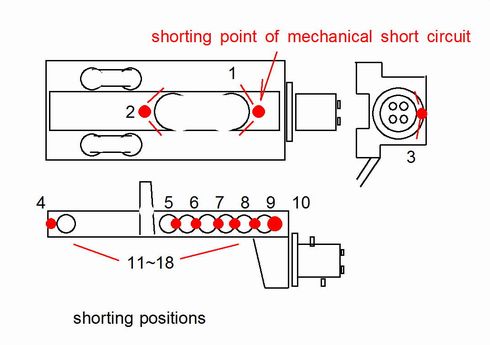 Non resonant finger
The finger is tapered to both vertical and horizontal directions to prevent from standing wave generation.

Most appropriate self-weight
LIVE18 is designed to be 12grams in self-weight to fit every type of cartridge and tone arm.

Double stopper pins
A pair of stopper pin arranged vertically helps secure plug-in of the shell into the tone arm without loose.

Two body colors
Semi matt alumite finished body is available in two colors, silver (LIVE18-S) or black (LIVE18-B). There is no difference in performance between the two.